Carnival has arrived and the whole world is celebrating!

Days of dancing, partying and lots of fun to celebrate the party that most people in the world celebrate. What you may not have known is that the Carnival has a lot of interesting anecdotes and facts. These are fifteen curiosities about the carnival that, if you don’t know it, you will surely be surprised to learn.

1. Did you know that Carnival is a luminous celebration everywhere but in Fasnacht (Switzerland)?

There it starts with a general blackout at four in the morning. Interesting!

2. Carnival came to America with the Spaniards.

It is said that Hernán Cortés himself took it to Mexico and went so far as to ask for funds from the Spanish crown to celebrate it in conditions on the other side of the Atlantic.

3. Asia is the only continent without Carnival.

It is said that Asia is the only continent without Carnival. But we believe that this is not entirely true: Japan celebrates the so-called Awa Odori. It is one of the oldest, although it is not held in February, but in August.

4. Carnival is not celebrated in the United States like in other places.

Why? Because they celebrate Halloween. In addition, in many cities it is so cold at this time of year that it would be impossible to go out in disguise as in other places.

5. What is the origin of the word Carnival?

The word carnival comes from the Italian word carnevale, de carne (meat) and levare (to remove). It refers to the great meat feasts that were held in the Middle Ages before Lent: a religious period in which meat could not be eaten. There is also another theory that says that the origin of the word derives from Egyptian celebrations called carrus navalis…

6. Is there a Carnival God?

The answer is yes. We speak of the god Momo and he is very much represented these days, usually in the form of a green or red doll, chubby and small to be burned on the last night. Momo is celebrated especially in Uruguay, Barranquilla, Panama and Nice. In the carnivals of Cadiz, the burning of Momo announces the end of the festival. In San Sebastian the God Momo collects the keys to the city to start the Carnival on Fat Tuesday.

7. Do you know which is the oldest carnival in the world?

There are different opinions… Some say that the oldest is that of Venice and others say that it is the Japanese Awa Odori. However, there is another carnival in Eastern Europe that could be the oldest carnival in Europe and the world. These are the kukeri’ festivals which are normally held in Bulgaria at the end of January and are still held today. These carnivals have a tradition of 4,000 years, when the Thracians, the ancestors of the Bulgarians, dressed up for these festivities. The “kukeri”, that is to say, the young people of the village, single or newlyweds, dress up in animal skins, cowbells, sticks, coloured ribbons. They also wear wooden masks to ward off evil spirits.

8. And the biggest carnival in the world?

It is said that the biggest carnival is in Rio but there are many more. The cities with the most colors and rhythm are Rio de Janeiro, Nice, New Orleans, Venice and Cologne.

9. The Carnival of Santa Cruz holds a Guinness record.

In 1987, there was a concert by Celia Cruz in the Plaza de España, with the Billo’s Caracas Boys orchestra, attended by 250,000 people. This was recorded in the Guinness Book of Records as the largest gathering of people in an open-air plaza to attend a concert, and it still stands today!

10. Two of Europe’s most famous carnivals are probably related to each other.

It is said that the first carnivals in Cadiz were organized by the colonies of Venetian merchants who settled there in the 15th century.

11. In Spain, carnivals usually end with the “burial of the sardine”.

Where does this custom come from? Why do we dress in mourning and worship a sardine? Apparently it was when King Charles III organized a party on Ash Wednesday to remind everyone to refrain from eating meat during the quarantine. And to make sure that everyone would attend, he organized a big sardine banquet. Unfortunately, the sardines were rotten and gave off a horrible smell. Therefore, the king ordered that all be buried and everyone was accompanying the burial with laughter and mockery. It is also said that it was in the 19th century, when some students from Madrid decided to organize a sardine funeral to symbolize the arrival of Lent.

Why not just say it? It is said that in the carnivals of Rio de Janeiro it is not rare to go out and practice…yes yes…So much so that the carnival presents the Brazilian government with many challenges and difficulties. In previous years, the Brazilian Ministry of Health delivered more than 11 million condoms in Rio de Janeiro, Salvador and Recife during the carnival.

13. In Cologne (Germany) a carnival is held on unusual dates

It begins there on November 11th. If you have given it is the 11th of the 11th month, but not only that: the parties begin at a curious hour: 11:11 in the morning.

14. Why are Carnival and Valentine’s Day celebrated at the same time?

That they have a few days in common is no coincidence. The common ancestor of both dates is the Roman “lupercales” festival, held on 15 February.

15. Where do typical Venetian masks come from?

We’re talking about those venetian masks with a long, beak-shaped nose. It seems that during the years of the plague that struck Venice, they were the masks worn by the doctors. They carried them like this to put perfumed handkerchiefs to help them overcome the bad smell of the sick.

Celebrate the holidays of your country and send money to your loved ones. Moneytrans makes it easy for you with its new money transfer app, as well as being the most convenient, fast and secure way to send money.

Would you like to escape for a moment into the incredible and fascinating world of Carnival? You’ve come to the right place! Read this article and immerse yourself into... 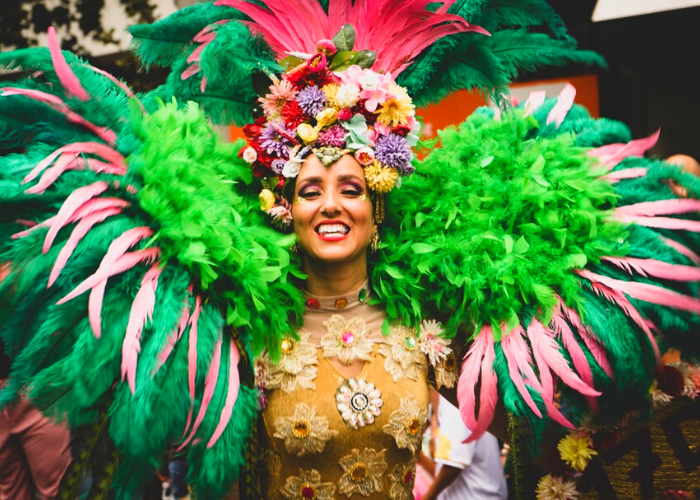 Would you like to escape for a moment into the incredible and fascinating world of Carnival? You’ve come to the right place! Read this article