In many countries of Eastern Europe, Easter is the most important religious celebration of the year. It is carefully prepared and awaited by all the population! It is celebrated by all Christians… but not at the same time! The Orthodox Church sets Easter according to the Gregorian calendar which is 13 days later than the Julian calendar, the one used by the Catholics and the Protestants. So its celebrations can last for weeks! Pack your bags because we are taking you to Eastern Europe to discover how Easter is celebrated in Romania, Bulgaria, Poland, Georgia, Ukraine and Russia!

In Romania, the Easter celebrations are eagerly awaited! Orthodox and Catholics are enjoying the celebrations to spend time with their families and share excellent meals!

As in most Eastern countries, the main Easter tradition is to paint eggs using different colours and traditional folk motifs such as ears, suns, leaves or crosses. What colour should you use first? Red! That is because it symbolizes the blood of Christ.

Easter customs are fully respected to the last detail in Romania. Before going to church, the ritual is to wash yourself by putting a red egg and a silver coin in the water, the egg representing health and the silver coin purity. Then, during the mass, it is customary to walk three times around the church holding a lighted candle and singing religious songs before going back home. The Orthodox Easter tradition is to greet each person on Easter Day by repeating the sentences “Christ is risen” and “He is risen indeed”. In Romanian, this would be “Hristos Vozkressé”, “Vo istina vozkressé”.

And of course, spending Easter in Romania also means tasting the culinary delights prepared specially for the occasion such as the Cozonac brioche. 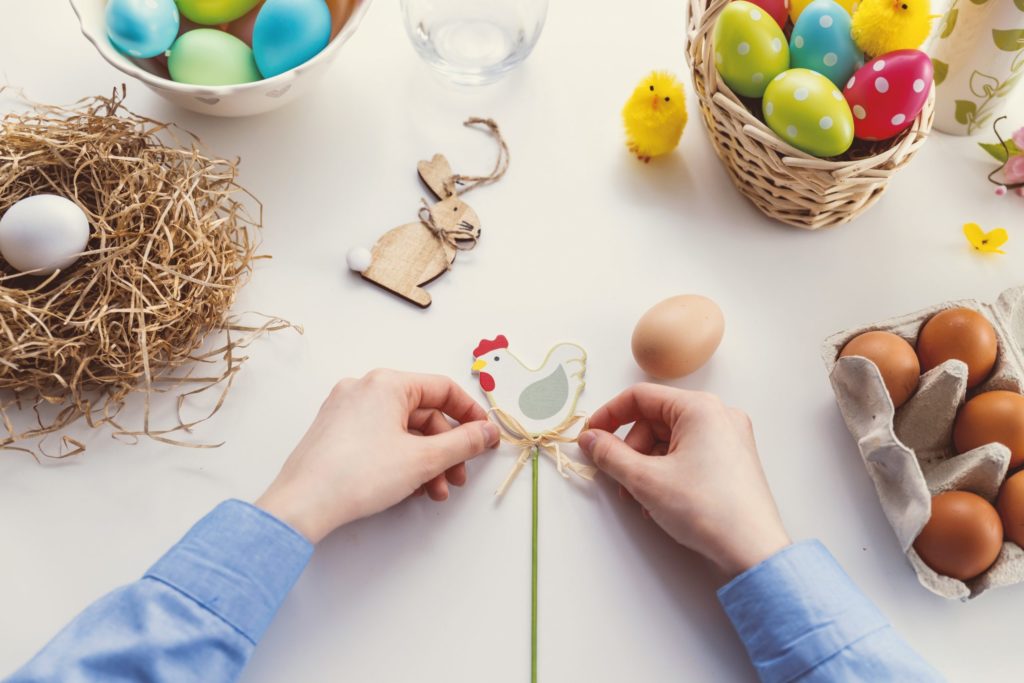 Vélikden is the word used to name Easter in Bulgaria and it literally means “the Great Day”. Painting the first egg in red is a key Easter art in Bulgaria. Furthermore, according to the Bulgarian tradition, the oldest woman of the family must make the sign of cross with the red egg on the children’s foreheads to bring them good health. The very first red egg is usually kept by until next Easter. In some parts of the country, the egg can be buried in a field to protect crops from bad weather.

If you spend Easter in Russia, you will also be able to admire incredible coloured eggs, greet each person by repeating “Khristos voskrese” (“Christ is risen”) and “Voïstinou voskrese” (“He is risen indeed”), and of course taste Pashka, a cream cheese dessert but also a Russian specialty, the Koulitch, a brioche with candied fruit and raisins.

The Easter Mass is the most important mass of the year for Russian orthodox people. The bigger mass is held at the Cathedral of Christ the Saviour in Moscow and even the Russian President attends it! You will also be able to see the best representatives of Russian orchestras choirs and bell ringers playing at the famous Moscow Easter Festival.

Easter is a joyful celebration and one of the traditions is an egg battle. What is the goal? Banging your egg against someone else’s without breaking your own and trying to break the other person’s egg. The one who ends up with his broken egg must give it to the one who beat him. A tradition shared in most Eastern European countries that has become a real competition over the years.

“The Great Night” is waiting for you in Poland! And yes, Easter in Poland is Wielkanoc which means “the great night”. This festival is celebrated according to the Catholic tradition with some pagan influences.

In Poland, there are two types of eggs, the “kraszanki” which are only painted or dyed eggs and the “pisanki” which are decorated with wax and which require a maximum degree of precision. The decoration of “pisanki” is a real artistic discipline that gives rise to the creation of masterpieces every year. You will surely be amazed!

One of the most original Easter traditions in Poland is the “Śmigus dyngus” or “Wet Monday”. A tradition that has its origins in pagan religions where water was considered to have virtues to cure diseases and promote fertility. In Poland, on Easter Monday, passers-by are sprayed with water or perfume nowadays.

Of course, if you celebrate Easter in Poland, you can’t miss the famous polish Easter baba, a brioche with lemon zest and raisins or even the “mazurek”, a pie filled with chocolate and dried fruits. 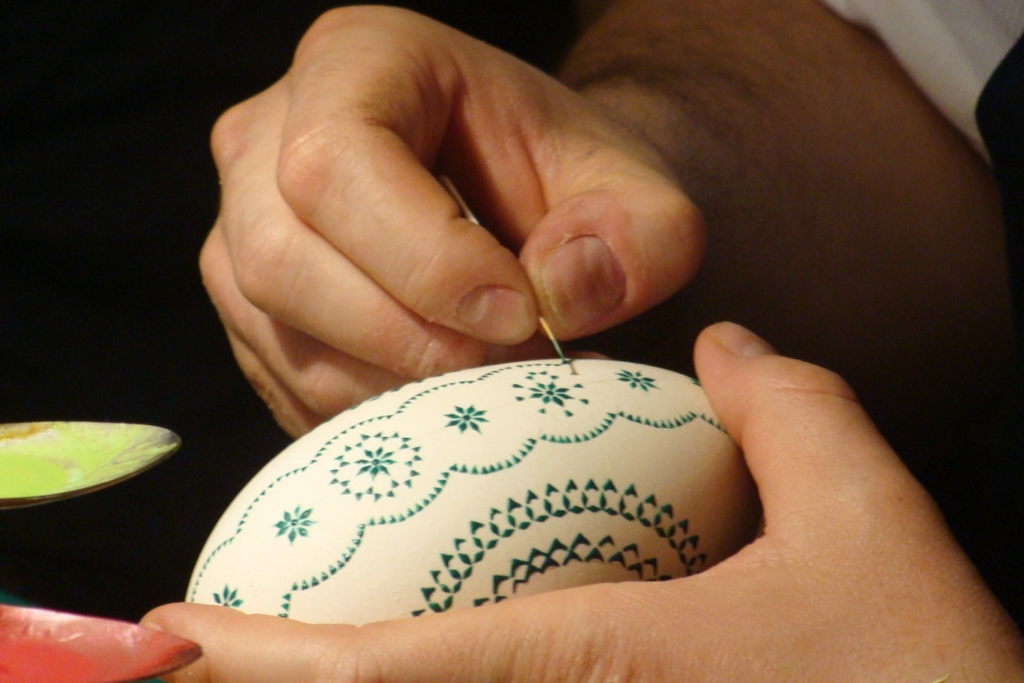 This tradition in Ukraine is known under the name of Pyssanka. The eggs or “pyssankys” are painted with a small funnel fixed to a stick called a “kistka” that is used to put the melted wax on the egg and create shapes. Pyssankys are considered by Ukrainians as talismans or lucky charms.

The tradition is to bring in a basket covered with an embroidered white bow the Paska, a traditional brioche made with fresh cheese, cream, egg yolks, raisins and sugar as well as a small portion of dishes that will be served with the meal. Once the basket is full, don’t forget to add a candle that will remain lighted throughout the mass. The priest then blesses the basket, and everyone can go back home and share the meal with their families in a joyful and cheerful atmosphere! 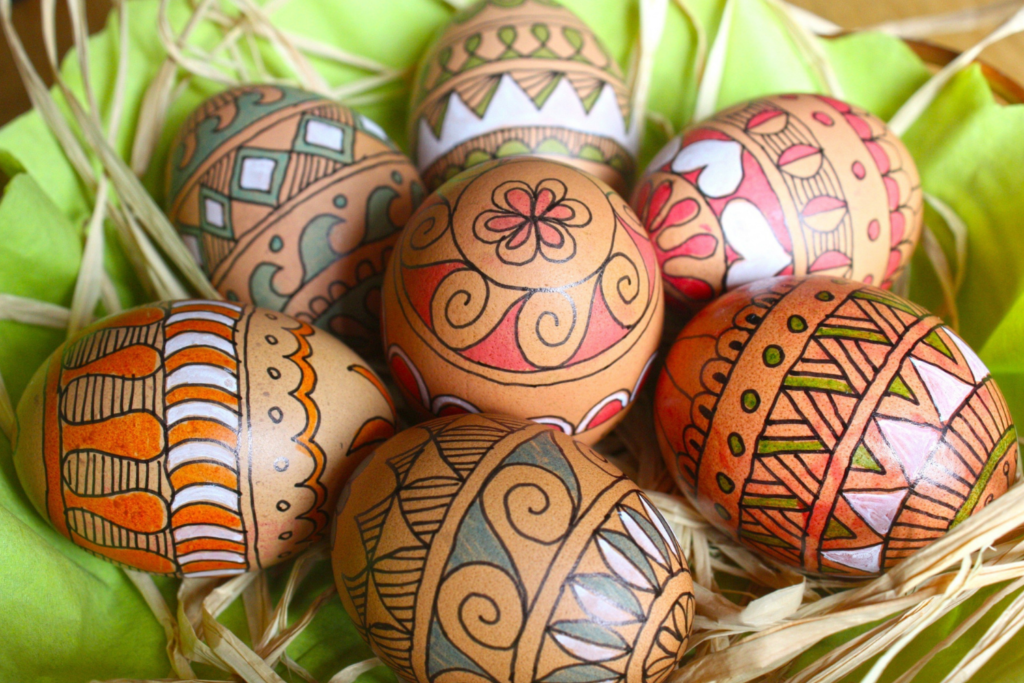 Georgians decorate their paschal table with red dyed eggs but also fresh grass as a symbol of renewal, resurrection and eternity. The eggs are dyed red in boiling water and thanks to a plant called the dyer’s madder.

The eggs are blessed in the church on Easter Monday and then brought to the cemetery to be dropped off on the graves in honour of the deceased. Some eggs are kept to be eaten or as good luck charms. Do you already have yours?

At Moneytrans, we are committed to highlighting traditions from countries all around the world! And we are also committed to making you smile!

To share Easter with your loved ones, enjoy a free money transfer until May 3rd with the promotional code EASTER. Promotion valid for transfers to Romania, Bulgaria, Poland, Georgia, Ukraine and Russia.

Don’t know how to use the promo-code? You will find all the information you need here! 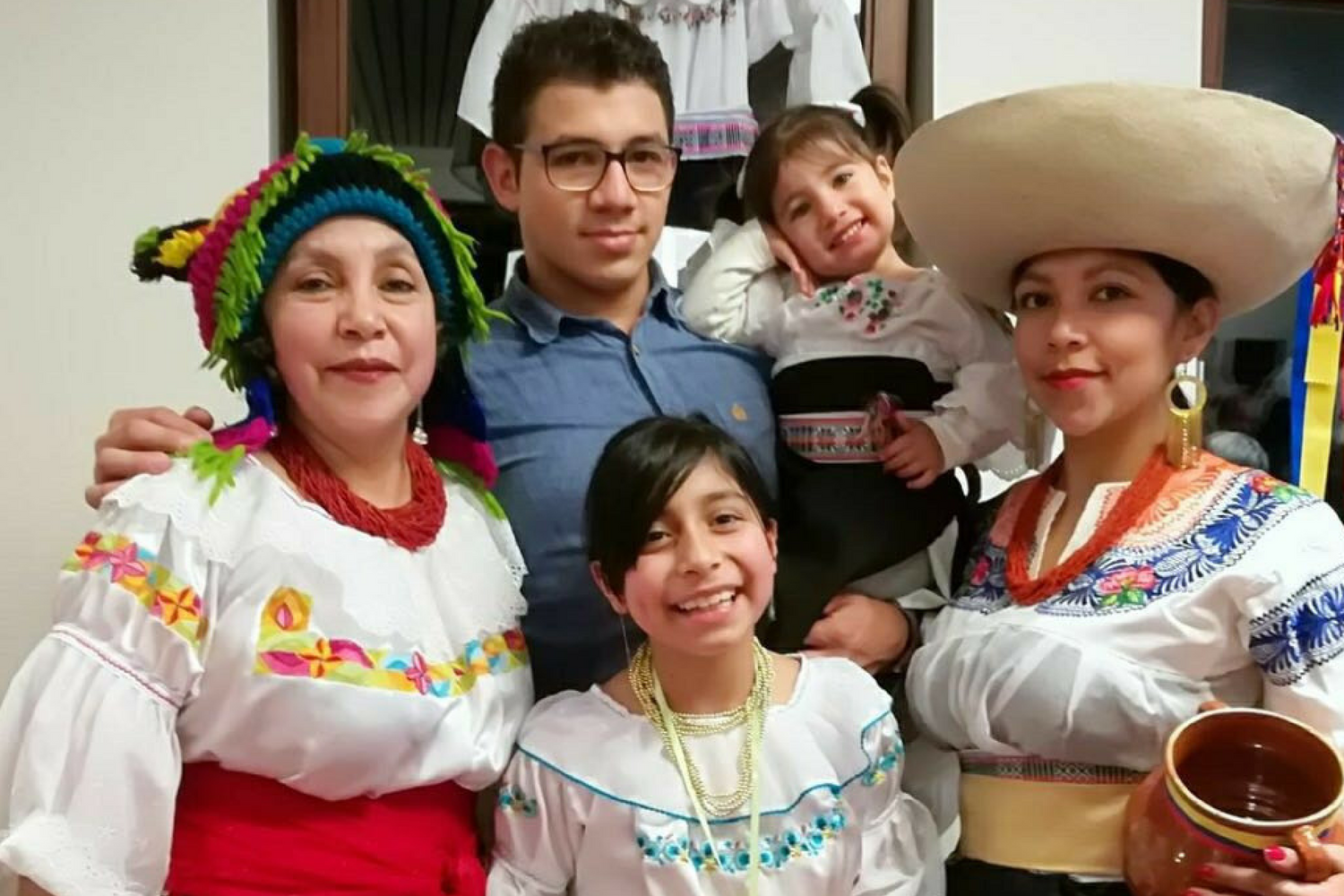 The beautiful Yamor festivities are coming!

Every year Ecuadorians in the city of Otavalo and the surrounding communities celebrate the Yamor festival with enthusiasm. For many, this historical-cultural celebration is “the most joyful celebration in... 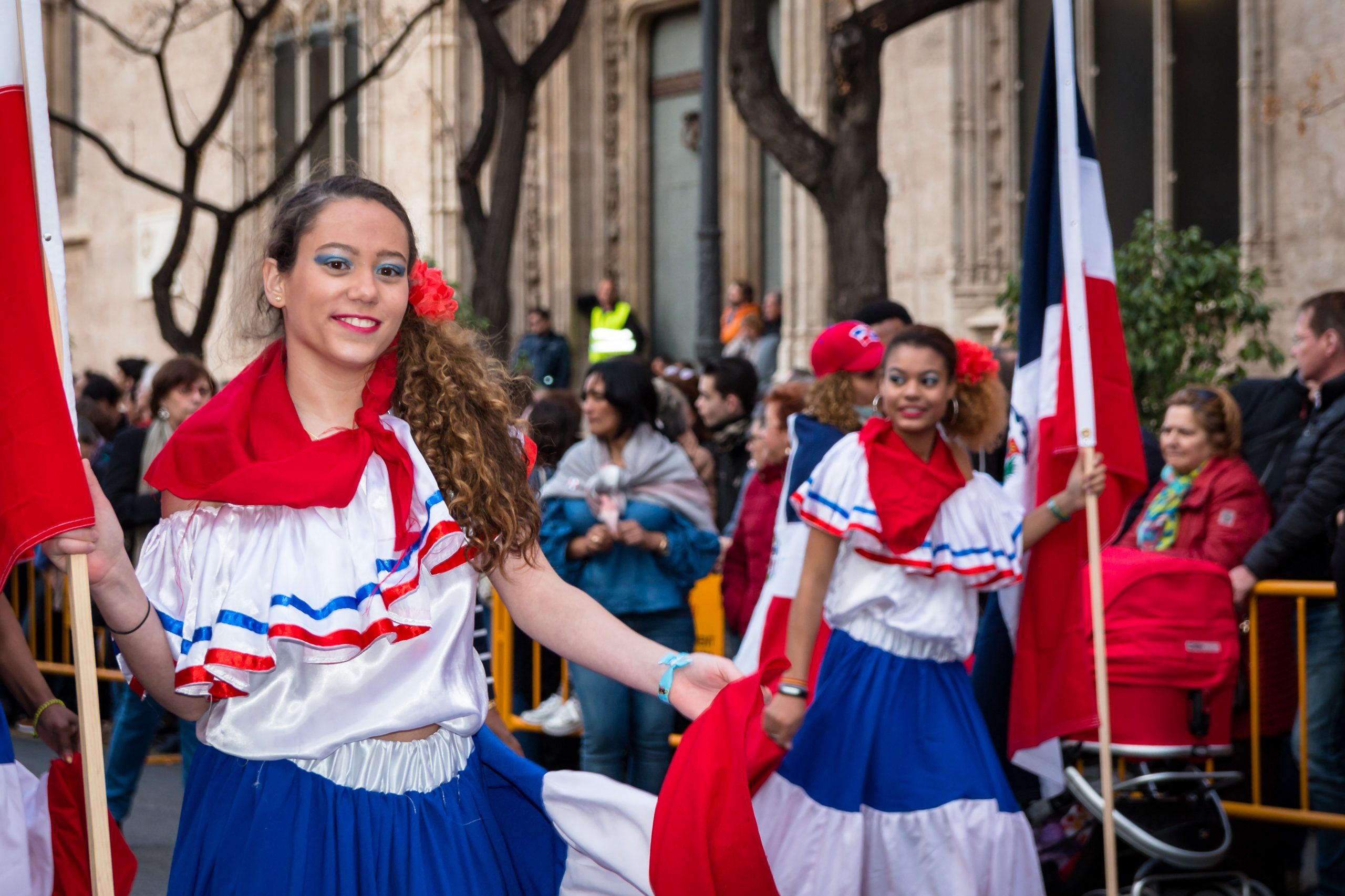 Dominican Republic can only be understood with music

To get to know a place, it’s not enough to open your eyes wide, you also have to stop and listen to everything that this place has to offer,... 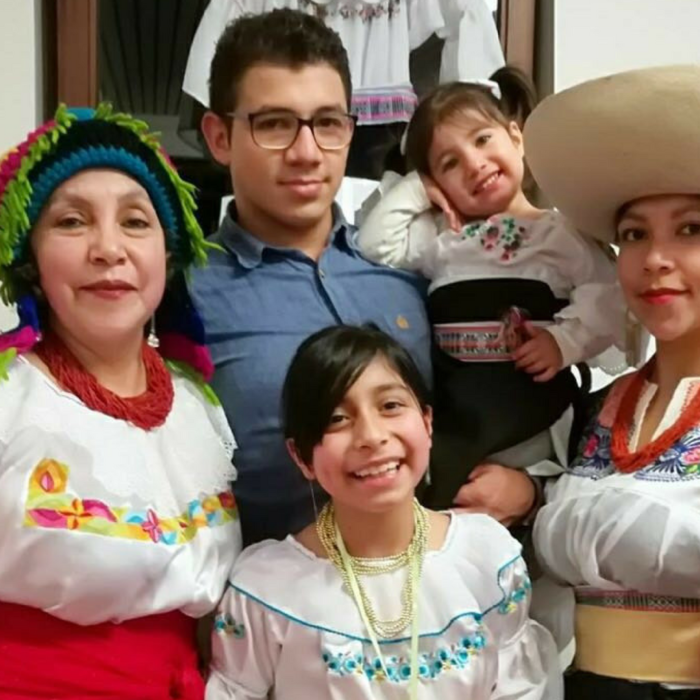 The beautiful Yamor festivities are coming!

Every year Ecuadorians in the city of Otavalo and the surrounding communities celebrate the Yamor festival with enthusiasm. For many, this historical-cultural celebration is “the 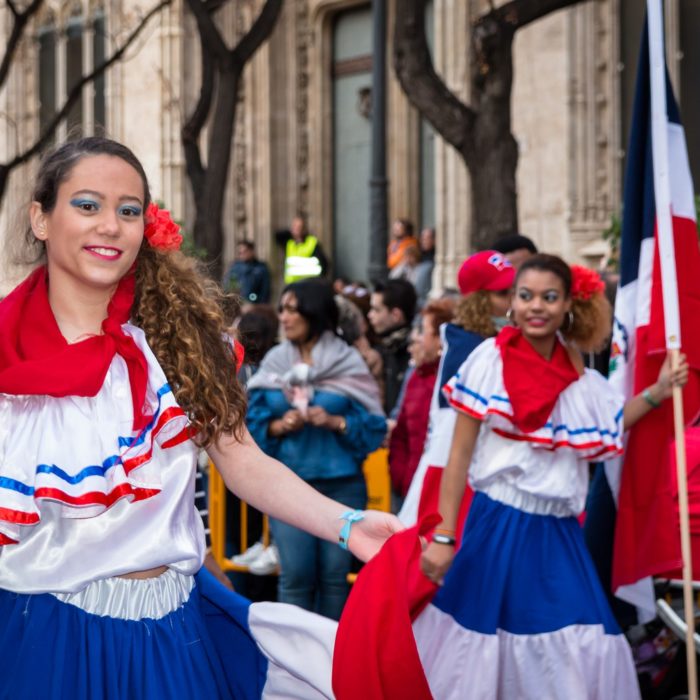 Dominican Republic can only be understood with music

To get to know a place, it’s not enough to open your eyes wide, you also have to stop and listen to everything that this